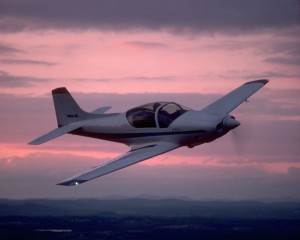 From the day it first flew in 1955, the Falco has been called “the Ferrari of the air”. This Italian design is sleek, strong, agile, and fast. A twin-seat with a bubble canopy for all-around visibility, it’s an outstanding cross-country plane with a thousand-mile range and full IFR capability… and it’s fast. A few examples have even topped 230 mph–on the standard 160 HP engine.

A superb aerobatic ship, the Falco is a graceful ballerina in the sky. Cuban eights, loops, rolls, snaps, and spins are only a flick of the control stick away. The agility is astonishing, and the handling is legendary. The controls are light and precise, and after pulling through a smooth series of rolls and loops, the comparison with jet aircraft becomes inevitable.

The Falco is also strong. Aerobatic certification means the Falco can easily take loads that would break an ordinary airplane. And even for pilots who always keep the wings level, it’s nice to have that strength.

The Falco’s proven record and engineering puts it in a class by itself. It was designed by Stelio Frati, one of the great aircraft designers of all time. It was certified as a production aircraft. It was built as a production aircraft and has a history of over 40 years of use by pilots in Europe. Now, with many refinements, the Falco is a modern, state-of-the-art aircraft built from kits and flown by pilots all over the world.

Compared to ordinary aircraft, the Falco is an Arabian stallion among plow horses. It is a classic, timeless design that has everything you could ask of an aircraft: looks, speed, efficiency, aerobatics, strength, and–above all–an absolute joy to fly.

The Falco. A plane for all seasons… and all time.